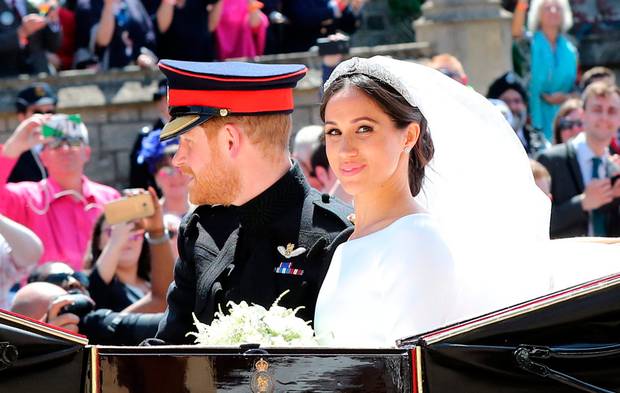 I didn’t care much for the royal wedding — as in: I didn’t care to follow the news on how things were progressing before the wedding, I didn’t care about how the couple met, I didn’t even care enough to actually WATCH the wedding when it was happening. First, I wasn’t the one marrying Prince Harry, though I never fully felt the same after finding out about that Nazi costume while he partied with a friend in black face and another friend in a Ku Klux Klan costume. Also, I don’t get into huge pop culture events. They just seem trendy for the moment, like a lot of awards shows. I don’t even go to concerts unless it’s some old school group performing.

Meghan Markle is an interesting entity on her own. Hooray for a black woman slightly changing the color of the English monarchy, but she wasn’t really a woman who “repped the culture” anyways. Not knocking her hustle, which it was just that according to her previous relationships and blogs, but her motives to marry Harry weren’t as rogue as people would think. Even with the less traditional changes they made during their wedding, I’m sure it had nothing to do with her being an activist.

As her doppelgänger — so I’m told — I think it’s fair to say that Meghan is beyond vanilla. And I’m not referring to her skin tone. She went over the top of “being black” at the wedding. But why? To hide the fact that no other blacks were there except celebs and her mom, who sat by herself? To essentially appease the British royalty of bringing some “culture” to make it seem as if they’re more tolerant and accepting of minorities? By the way, aren’t Jamaica and Barbados and the Bahamas and Grenada still waiting for their reparations? Again, not saying she isn’t “black enough” and I don’t know the meaning to any of the planning of wedding events, I just don’t think a priority of her marriage was to extend an olive branch from the UK royalty to people of color. Nonetheless, it’s still a big move for black acceptance and social climbing. We had Hattie McDaniel as the first black Academy Award winner as a maid in “Gone With the Wind;” we even participated in black face minstrels because they were the only ways that we could be accepted as performers in the early twentieth century. We took the positions because we really didn’t have other choices but to sell ourselves for the sake of another race to be happy with their perceived images of us. We couldn’t create our own or be our own. But we’ve made strides since then. Now, black tokenism isn’t really our way of excelling when we have cultural issues that are plaguing multiple media platforms on an international scale. But I guess that every little bit helps?

We’re proud of a woman for marrying a man. “She made it.” We’re rooting for progressivism but reverse feminism at the same time. Meghan was an actress. The fact that she married someone with fame and glory makes it sound like we’re uplifting a gold digger. I mean, maybe she is, but if that’s the case, we need to re-evaluate some other people we’ve shunned in the past.

I’ve also never fully understood the obsession that people have with the royals. But in particular, black Americans have really fawned over them as of late due to Meghan being added to the mix. She’s now “our duchess.” The whole concept is interesting to me because we place England on a pedestal: how they’re more “tolerant,” while we also complain about the race relations and lack of government assistance with combating inequality in the U.S. Do people not understand that slaves came to the U.S. BECAUSE of England? We arrived on ENGLISH slave ships? Even though the Brits supported freed slaves if blacks fought in the Revolutionary War in their favor, they still benefited off of the slave economy? Besides, even if we want to go more recent, Brexit took place simply because the majority of UK residents wanted to decrease immigration. Yeah. How’s that for being tolerant.

Don’t get me wrong: Nothing in this world is completely good or bad, and Meghan’s marriage to Harry symbolizes that. Our obsession with the “fairytale” of it all makes it seem as if we still want to be accepted by white society, that we can still “make it” according to their standards. We should know our regal history enough to not be obsessed with this event —  that there are black royals all over the world celebrating their marriages, when we have American black lawmakers take positions that have never before been held by people of color. We were not allowed to hold these positions. When we were not allowed to have a voice. When we were not allowed to have intellect. But, no. We tend to overlook them. Personally, I’d rather have tea with Stacey Abrams for really being a change and running for governor in such a historically racially-charged state. But who am I.

Overall, we can and should definitely be happy for Meghan and Harry, but we shouldn’t treat this as huge of an accomplishment that it has seemed to take. A woman can do more than get married and rely on the status of a man, and a black woman can do more than marry a white man with money. Hopefully, she uses that platform to do just that. Then, we will celebrate.